While the tech-heavy index continued to gain around 13,100 keys, the Nasdaq 100 rose early Wednesday. U.S. equities are looking to recoup recent losses, with Monday’s session representing the worst losses for major indexes in months. Market participants’ attention shifted from the federation’s policy to the Russian invasion of Ukraine, which had a significant impact on late risks. US CPI data will be crucial ahead of next week’s federal policy meeting, with markets currently expecting a 25-point increase.

At a time when the federation is about to start issuing an emergency policy during the epidemic, rates may be paying attention to growth investors. Despite an agreement on inflation next week, Ukraine’s crisis is on the rise with global growth forecasts. While the broad Nasdaq 100 Index may be dragged down by non-cash development names, there may be strategic opportunities in mature companies. Given the volatility in our hands, it looks like we might be in the pickup market right now. 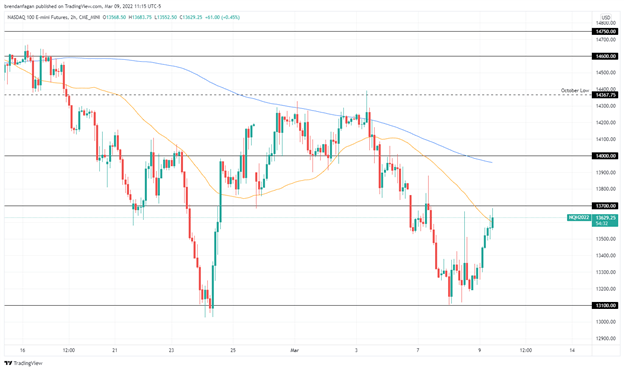 As mentioned, the Nasdaq 100 Index (NQ) supported around 13,100 by the end of February and early March. The index has now moved to 13,700 levels, which has served as a strong point in the last few weeks. Up to 13,700 hot bids could return 14,000 to the game, with the October low of 14,367 higher. Despite war headlines and inflation, NQ remained between 13,100 and the October low for several weeks. Considering the list of accidents on the horizon, one of these boundaries could soon be broken.

While NQ sits comfortably in the recent low, profits could be boosted as traders shift their focus to Thursday’s US CPI report. With a current consensus estimate of 7.9%, more than 8% of the print could shock markets. With inflation already in its 40s, the ball is in the court of the federation. Will they remain stupid, citing threats to international opinion as a result of Russia’s invasion of Ukraine? Or do they just not pay attention when you tell them something to do? Only time will tell, but the federation’s loyalty may be online next week.